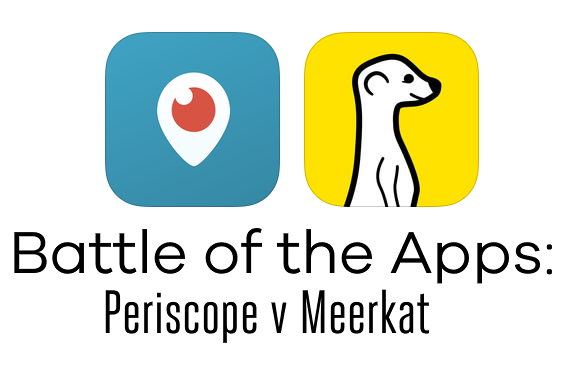 If the first thing that comes into your head when you heard the word ‘meerkat’ is either Compare the Market or a little fluffy critter, chances are you’re in the wrong industry. If you’ve been in any way conscious in the past few weeks, you’ll know all about Meerkat and its ambition to be the ‘next big thing’ by bringing live streaming into the hands of your everyday Joe on the street. After a flying start, it seemed that Meerkat was set for success. However, it took merely days for Twitter to buy out and release its own live streaming app; enter Periscope. With a slicker UX interface and Twitter behind it, Periscope has now stomped all over Meerkat, leaving the sickly-yellow app all the way down the app charts at a less than desirable No. 523 on the U.S. iPhone download chart. No last minute funding of $14million from the likes of Jared Leto is going to save it now. Having used both apps (which both currently house awful streams from the public, one of my favourites being ‘I’ve hurt my toe’  featuring a man discussing his bandaged toe), it’s clear from the off why Periscope trumps Meerkat; it’s just plain simple to use. Slick in every way, it’s a complete experience that allows you to find streams and follow those you already follow on Twitter with ease. Combine that with the fact that communicating with those running the streams is a painless experience, in comparison to Meerkat’s current chat format, and you have an expertly conceived app that opens the door to a whole new way of communicating.

Gerard Depardieu and his rather revealing scene

Taken from The Guardian

When you think of Gerard Depardieu, what’s the first adjective that pops into your head; Sexy? Fit? Stunning? Clearly not anymore. During one of the office’s recent odd conversations (and trust me there are plenty), we discussed Mr. Depardieu’s recent role in Welcome To New York, where he plays the role of philandering former IMF boss, Dominique Strauss-Kahn. There’s a much talked about scene that sees the star strip naked, Hogarthian paunch and all. Rather than it being a glorious celebration of the naturally ageing human body with all its failing, it caused the critics and subsequent audiences to gasp with horror. Several tangents later in the office and we began discussing the October cover of Attitude, featuring Gareth Thomas and his boyfriend Ian Baum proclaiming their undying love for one another. A brilliant example of how far we have come as a society, yet the image is riddled with something that made us feel a little uncomfortable.  So what’s the common thread in these two examples? It happens to be unconventional displays of sexuality – either ageing sexuality or non-heterosexual sexuality or god forbid the two together – fact is Ian Baum is 50 plus. Ageism is still a massive issue within our society, especially when it comes to having sex. Just imagine for one second an alternate universe in which those over 60 still have a sex drive. I mean just really imagine it. Wait, that’s not an alternate universe, that’s our universe. And who’d have known!? For some strange reason, the media we are fed daily has us believe that once you reach your twilight years, you take on the genitalia of a Barbie doll and have nothing better to do than moan about Mary Berry and race one another on your Stannah stair lifts. Let’s get this straight; people have sex (or attempt to) until the day they die. That’s right, grandma and granddad have been at it like rabbits behind your back. So why doesn’t the media portray the older body as sexual? Don’t get me wrong, I’m not in the market for having David Attenborough’s genitalia shoved in my face whilst he interviews Bjork, but wouldn’t it be nice for us all as a society to recognise that older people are sexual beings too? That’s why I want to propose a challenge to the media as a whole; a campaign to recognise that older people can be sexual too. I’m not talking an alternative Page 3 which sees Babs from down the road holding a pack of Rich Tea over her unmentionables, but a new take on the classics. Something stylish, something intriguing, but most of all, something that can help change our mindset for the greater good. I want to see ad agencies revisit classic ads such as Hagen Daz’s ‘Lose Control’ and reinterpret them with sexualised images of the elderly. The perfect example can be seen in this take on the famous Eva Herzigova Wonderbra ad by Age Concern. Let’s face it, we’ll all get there at some point, and I plan on being a sexually active pensioner in my care home of joy even from this, my vantage point as a green twenty something!  Ad agencies, do you actually have the balls to rise to the challenge?

Inside the Velvet office

If you pay any attention to the papers, you’ll be fully aware of the problems that face recent graduates and young people today in Britain. High rates of unemployment, ridiculously low pay and internships that serve merely to exploit your willingness to ‘make it’ are not exactly anyone’s idea of fun. Having graduated only last year, I’ve since worked in positions ranging from website development and copy editing to serving coffee and full English breakfasts; all high-interest fields for a Communication & Media Studies graduate, clearly. It came to a point where I had had enough, packed my things up and moved to London. Some might say it was a massive risk, but when you’re rewarded with the experiences I’ve had in my short time in the city, you only see it as a necessity. Trawling the internet for a position of interest, I discovered a role here at Velvet PR; a passionate B2B marcomms PR company based in coffee-culture haven Chiswick. Although my first draw to the role was the experience I could gain within a sector of PR I had never explored before, the real cinch was the personability of the team shown through Velvet’s site. For me, there’s nothing worse than working somewhere with the sterile environment of a morgue (a certain weekly magazine I worked a brief time for comes to mind, but that’s another story).

Having never truly looked into the world of marcomms and only my degree to refer to, the travel to Velvet on my first day was a little on the tense side. After being introduced to the team and shown the office, all of those feelings soon subsided as I was welcomed as if I had been a part of Velvet for years. Putting me at complete ease, they made me come to the realisation that I am here to learn, not to enter at a senior level. Of course, with being an intern comes the awful thought of what I would be doing; making coffee, collecting post and organising files that no one had read since 1998. To my surprise, this was all dismissed within minutes, as I began collating information in relation to a client’s latest venture and creating a handbook for our client to use in the future. From the very first task onwards, I knew my decision to leave home and move into a position I didn’t have the world of knowledge about was the right one. Already in my time here, I have called the likes of the international press, been given numerous responsibilities to ensure deadlines are met by the team and voiced my opinion on events I feel suit our clients. Even in my first week, I was invited to a lovely company dinner to see off a velveteen on maternity leave. And that’s one of the best parts of it all; I am heard, not merely another fixture in the room.

Sure, I collect the post and make tea, but my time here is so much more than that. To Velvet, I am not just another intern to be run into the ground, I am a team member.