Undeterred by the memes of tents pitched outside Primark, shoppers savvy enough to know where the biggest discounts would be arrived early doors, for non-essential retail’s big reopening.

The most anticipated reopening was undoubtedly London’s Oxford Street. For much of the past year, you could hear a pin drop on a road that once attracted 200 million annual visitors, thus painting one of the starkest images of the pandemic’s painful impact on retail.

But this dead time and upheaval triggered plenty of questions. Experts and consumers alike wondered what Oxford Street would be without the Topshop and Debenhams flagships that once anchored it. Would it still be fit for purpose?

Well, these questions didn’t stop hordes of shoppers coming for a browse on April 12th. Following £150 million in funding from Westminster City Council, I picked up my mask to see how Oxford Street has transformed as we edge out of lockdown once more, for our latest Velvet Lab.

I found that closed flagship outlets have been covered by billboards inscribed with ‘reinventing the nation’s high street’, while unused Christmas lights have been replaced by flags highlighting the three pillars of a new age Oxford Street: greener, smarter, and future. 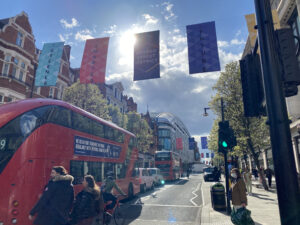 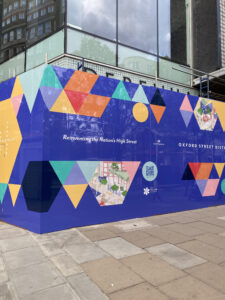 Step closer to billboards used to cover closed stores, and you’ll find a QR code that takes you to a website setting out Oxford Street’s ‘ambitious vision’. Users can scroll through a timeline from its days as a Victorian Bazaar to a 21st century high street, while exploring the new pillars in greater detail: greener will bring nature into stores and use zero-carbon transport to improve air quality, smarter promises experimentation and smarter design.

Other QR codes spilled out onto the pavements are also used to help shoppers map their routes and, for the music lovers, Oxford Street has teamed up with Spotify to build a code that gives access to three London-inspired playlists.

Plans for other technologies could also integrate AR for shoppers to explore the Oxford Street of past generations through their phones. 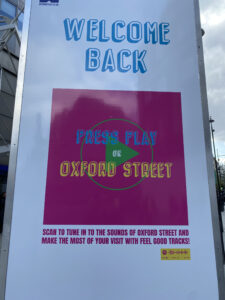 Oxford Street: teamed up with Spotify for shopper playlist

With social distancing measures still in play and restricted access into stores, retailers have been forced to reimagine something inherent to every high street: the queue. The Sunglasses Hut offers AR try-ons of products for shoppers standing outside, while luxury jeweller Swarovski – in tune with our very British sentiment towards waiting – allows shoppers to scan a code to join a virtual queue, and be alerted when it’s their turn to come in-store. QR codes are a growing force on Oxford Street. 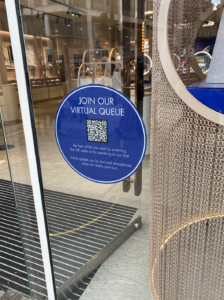 While they boost both customer service and product sales, QR codes are also key to encouraging shoppers to keep browsing. With Selfridges’ reopening supported by live DJs, shoppers can scan codes placed on every floor to request a song, incentivising them to stick around. Gone are the days of the infamous IKEA-type mazes keeping you frustratingly locked inside. 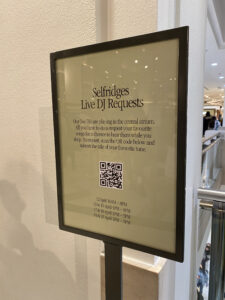 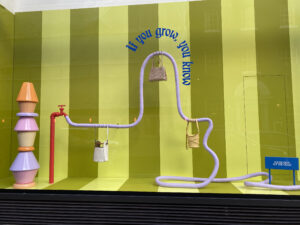 Other retailers are also turbocharging their storefronts. Flannels has recruited light sculptor Anthony James for an LED installation that ties seamlessly across every window to entice the night-time shopper. The annual Christmas lights switch-on might have some competition as this year’s biggest showstopper.

Although the pandemic accelerated ideas of a reimagined, experience-led high street, we can’t ignore the retailers who were already testing the water. Game’s Belong offers immersive e-sports experiences mirroring the traditional arcade. Consumers can treat it as a social hub while brands use it as an opportunity to engage with e-sports consumers. But like Selfridges boutique cinema, which launched in November 2019, this is yet to reopen. 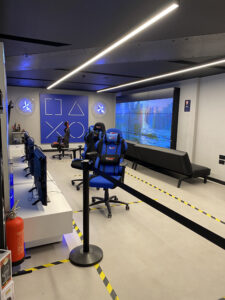 Other stores, including John Lewis, have kept a watchful eye on the brands that thrived while we were stuck indoors to create immersive experiences. John Lewis’ new Peloton pop-up is kitted out with equipment to trial and specialist advisors on hand, and could drive a second sales boom from shoppers who’ve steered away from buying online. 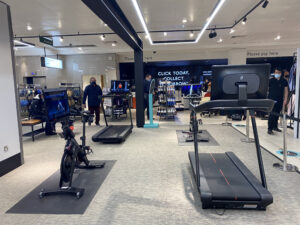 To sum up, Oxford Street’s reopening has been humble, but in no way lacklustre. The overwhelming numbers of people who flocked there yesterday were craving one thing: normality. The intense scent of Dior Sauvage in House of Fraser; puzzling escalator systems in Selfridges; queues for the till and murmurings of other shoppers all feel part-and-parcel of the high street experience – one we’ve most definitely missed and would continue to miss if it wasn’t there.

Big things are on the cards for Oxford Street’s shoppers – and it’s made sure we know this; for now, the focus has been on giving consumers what they remember spliced with a good bit of theatre and laced with a useful smattering of tech.

« Friday 5: More Reasons Sport Is A Business Winner » Friday 5: How the music industry’s leading the way in 2021