Earlier this year, it was announced that Argos may lose its in-store ‘laminated books of dreams’ (catalogues, for the non-Bill Bailey fans among you) and switch to having customers browse iPads. These iPads, presumably somehow rendered indestructible and un-stealable, will be trialled in a number of concept stores in the coming months. Upon release of the news, some hand wringing ensued, some nostalgia, some nonsense about lost revenue from browsing. 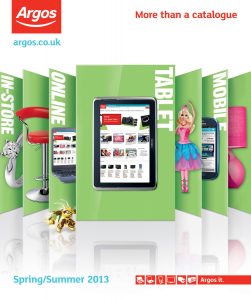 But frankly, Argos needs to move even faster, or risk missing a trick. In an age when there’s demand for the likes of eBay and Amazon to open High Street presences – and Amazon is even considering drone delivery – to get orders out faster, a network of well-supplied mini-warehouses on every High Street is an asset and a half for Argos to own. But unlike eBay and Amazon, the order process remains full of redundant steps and pain.

This week, on the return from a dentist appointment, I passed my local Argos. I needed two Christmas gifts and couldn’t face the ‘Sorry you weren’t in’ delivery cards that ordering these bulky items online would entail. I’d already done my research and knew I’d buy them from Argos. I’d been planning to ‘click and collect’ at the weekend, but  at 10am on a Monday morning, the store was deserted and the thought of return trip in the next month of shopping hell was unappealing. I nipped in.

Given that I knew exactly what I wanted to buy – I headed straight over to the automatic ordering machines. But can you browse on these? No. You need the product number. Back to the catalogues to find the two single items I knew I wanted.

Talk about a needle in a haystack. Within a minute, I’d given up uselessly flicking between the wrong pages and the index and was using my iPhone to look up the codes which I typed straight into the terminals. I was stuck  between a catalogue containing the items I needed, but in a total mess, and a terminal that contained all the items I needed hidden, but hidden behind an impenetrable system. Both the catalogue and the terminal systems were just not fit for use.

If Argos installs iPads, will I still need to go to the order terminals? Why not stick in another 30 terminals and have people order from them directly? Frankly, Argos has the potential the be brilliant, if it only understood how people want to buy now. Are iPads even the answer?

Some people will still enjoy browsing, I imagine, particularly older consumers, and particularly around Christmas – though I’d be interested to know how ‘standing at catalogue in-store time’ has declined in recent years. There’s probably still potential in offering catalogues to take home – as browsing may be more popular here. But once, catalogues were the only way to explore the product range. Now,  you can go via the website – or even have search results turn up specific items directly from Google (which is what happened to me).

The sticky, tatty laminated catalogues aren’t what’s wrong with Argos – the buying process is totally out of touch with how a great many people now acquire what they need. I’ll still use the store – it’s useful, despite its failings. I don’t always want to wait in for a giant parcel to be delivered when I can collect at my convenience. But Argos could be blasting its online competitors out of the water with just a bit more consideration for how customers shop now.