Introduction
Velvet client Live & Breathe, a retail and shopper creative agency, wanted to cut through the clutter of confusing and conflicting ‘expert’ opinion about the state of the British High Street.
As an agency that works with leading retailers and High Street brands including Morrisons, LG, Birds Eye and Nestle it’s vital Live & Breathe understands what’s really going on, in order to inform its creative campaigns and make it an authority in its market. 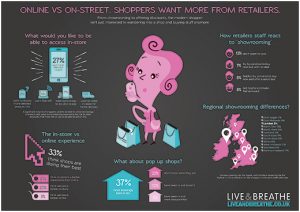 The Challenge
The future of the High Street, and its role in the national psyche, has become a subject of much heated debate. Retail experts and critics have fuelled this debate, with politicians and the media jumping onto the bandwagon. The result has been a great deal of heat, but little light.

Against this backdrop, Live & Breathe decided to go straight to the people who really matter in this debate: consumers and shoppers. What did they think about the High Street? What are their shopping habits? And are they to blame for the High Street’s demise?

The Solution
Velvet worked with Live & Breathe to commission research among shoppers and consumers to establish whether their hypocritical and contradictory approach to High Street shops and shopping was at the root cause of the problem.
This bold approach – with the potential to make uncomfortable reading – was intended to give Live & Breathe a unique and compelling insight into shopper and consumer behaviour, as well as a though leadership position no other player could boast. 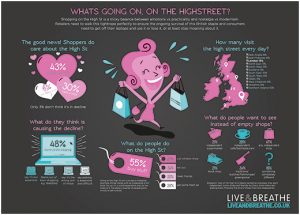 The Approach
It was important the research delivered a series of clear, unambiguous findings that would appeal to the media, add substance and move the debate about the High Street forward. A number of themes and topics were identified to support these desired outcomes, including: focusing on the role of shoppers in the High Street’s demise; respondents’ awareness of the difference between being a shopper and a consumer; awareness of Mary Portas and her pilot scheme.

The Results
The research findings were so compelling and unequivocal that Velvet proposed sharing them with leading trade publication and marketing directors’ bible ‘Marketing Week’ on an exclusive basis. This enabled the magazine’s editorial team to digest and analyse the results in detail across three pages of the publication under the headline ‘Rebooting Britain’s High Streets’.
With Live & Breathe’s important marketing audience covered, Velvet used the research findings to draft a number of press releases tailored for other stakeholders. Further high profile coverage, quoting Live & Breathe’s MD Nick Gray, appeared in The Daily Telegraph, The Grocer and The Scotsman.

By commissioning intelligent, focused research Velvet was able to elevate Live & Breathe onto the national stage, giving it a voice and an opinion that was unique, relevant and sought after.