Grabbing hold of an important issue, through research, analysis and extensive PR, positioning P&H as the outright leader in its industry category

As the UK’s number one delivered wholesaler, Palmer and Harvey supplies around 70 percent of the country’s petrol stations. It was keen to demonstrate its expertise in this sector (particularly advising forecourt operators on how to run their businesses more profitably), position the company as the de facto point of call for media on stories to do with forecourts and raise awareness more broadly.

The Palmer and Harvey Forecourt Report, an in-depth analysis of the state of the UK’s forecourt industry, was therefore written in conjunction with Velvet to illustrate Palmer and Harvey’s industry expertise. This 45 page report explored an industry in flux, pulling together all the available data, research and insight. 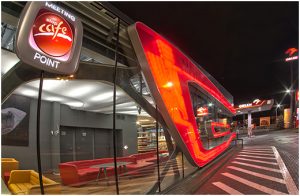 As the launch of a report of this nature is not ‘headline generating’ in itself, Velvet needed to create a hook to drive coverage. We therefore worked with Local Data Company, DVLA and University College London to find out how many petrol stations were in each postcode along with car ownership statistics. We then created a story based on this research, looking at the growth in ‘Fuel Deserts’ due to the decreasing number of forecourts combined with more vehicles on the road.

Velvet initially targeted one national as an exclusive (the Daily Telegraph) and also sold in a larger feature on the report to trade bible Forecourt Trader. After the news was covered by the Telegraph, we continued to sell in the story to features desks at the nationals and other media.

Among both the news and features editors, interest in Fuel Deserts built up its own momentum. As well as the news story, the Telegraph ran a double-page article in its Motoring section, with an equally notable double-page feature in the Sunday Times InGear supplement. Radio 4’s Today Programme, The Daily Mail and The Sun also carried the story, as did the Daily Record in Scotland and a wide range of trade, consumer motoring, automotive and regional media.

In total, the story was covered in 36 articles and was seen/heard by 15 million people, with an equivalent advertising value of approximately £1 million and innumerable mentions of Fuel Deserts in blogs and tweets. Palmer and Harvey has since been approached by the BBC to comment on forecourt issues and its clients have used the Forecourt Report’s research in their own marketing collateral.

A Parliamentary Early Day Motion has been debated on the subject of Fuel Deserts, triggered by Velvet’s Fuel Desert research on behalf of Palmer and Harvey. The EDM “notes with concern the particular effect this is having on rural communities who find that their local petrol stations are closing down at an alarming rate”.

“The Forecourt Report was a great way to collate and demonstrate our credentials in this sector, and the Fuel Deserts story gave our media profile a much-needed shot in the arm. Velvet was instrumental in making all this happen” Richard Hayhoe, marketing director, Palmer and Harvey