Mace are local convenience stores, owned by Palmer & Harvey but independently operated. Palmer & Harvey wanted to generate positive sentiment among the Mace franchisees and to help them drive footfall.

When tasked with this brief Velvet needed to find a red thread that would act as a theme for any support initiatives it developed for Mace retailers.

Velvet revisited the findings of the consumer survey around CTNs that it undertook for the Palmer & Harvey Shop Health report and alighted on the role of the CTN in the community as the theme under which all its Mace support would run.

We worked with Mace retailers throughout the UK to produce events around key British events, that would run in store and reinforce the fascia’s community role.

We planned pancake flipping competitions for Shrove Tuesday, colouring-in competitions for the Queen’s Jubilee and hula-hoop contests in-store for the Olympics. We provided guidelines on how to run such events and how to invite local media for photo opportunities to generate positive publicity. And we were always available to provide support on the ground.

Not only that, we developed social media support packages so that each Mace could drive its own Facebook activity and build a local community following. 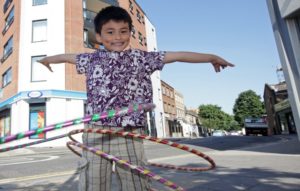 We drove positive media coverage in local media for all participating Mace stores.  All of the stores involved reported a positive impact on sales and footfall in the weeks following each event. Palmer & Harvey were recognised for the support they provided Mace owners and when the wholesaler next measured sentiment among its Mace customer base, there was a marked uplift.