Becoming The Most Talked About

Research is a useful tool for reaching the national media, but it also demands emotional resonance. Velvet and Telegraph Hill needed to create a platform that combined both the agency’s content and social media know-how and its understanding of sharing psychology.

Velvet recommended that Telegraph Hill analyse tweets to determine the ‘ten most talked-about television moments of the year on Twitter’ – by analysing tweets that took place during the show, while people were using two devices.

Velvet crafted a story around this research that demonstrated Telegraph Hill’s insight into the emotions of sharing on social media – neatly tying in with the ‘end-of-year round-up’ articles found throughout the media during December. 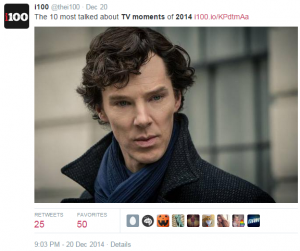 Velvet targeted i100 – the online arm of the Independent newspaper – as a primary national media target and offered it the story as an exclusive, with a trade exclusive also offered to key title The Drum. This was timed for release between Christmas and New Year: a time when the media are keen to feature ‘review of the year’ stories.

After the story first appeared it was tweeted to all the shows and celebrities involved as well as sent to other national, media trade and regional titles.

As well as the initial exclusive with i100 and The Drum, the story was picked up by UK national titles including the Telegraph, Independent, ITV and Daily Star – as well as Yahoo!, International Business Times and major regional titles in Wales, Scotland and Northern Ireland. There was also a major feature in The Sunday Times.

In total there were 23 articles as well as over a thousand shares of the story on social media – even from one of the stars of Made in Chelsea. Overnight, the name Telegraph Hill was everywhere.